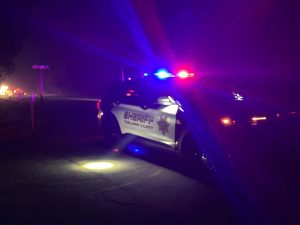 Big Oak Flat, CA – A strange scene for residents along Big Oak Flat as one of their neighbors was armed with a shotgun and screaming that intruders were in his home.

The short-barreled firearm was not the only weapon the suspect, 44-year-old Billy Dowling, had on him. Tuolumne Sheriff’s Office spokesperson Nicco Sandelin detailed deputies found Dowling standing in the middle of Big Oak Flat Road yesterday morning yelling at no one while claiming people were dead in his home, and intruders were under his home.

Sandelin recounted, “Deputies talked Dowling into dropping the shotgun. He began yelling to the deputies about his wife needing help and intruders in his home.”  Dowling then alerted deputies that he also had a revolver in his waistband.

As deputies attempted to detain Dowling, he resisted momentarily, according to Sandelin, who added, “One of the deputies was able to remove the revolver from Dowling’s waistband during the struggle. Dowling was successfully detained without further incident.  Once detained, deputies noticed Dowling was showing objective symptoms of being under the influence of a drug.” Sandlin did not know the exact drug.

To determine whether there were actually injured people in Dowling’s home, a search was done. Sandelin disclosed, “No one was found inside or underneath the home and no evidence was present to support Dowling’s claims.” Subsequently,  he was arrested for various firearm-related charges.