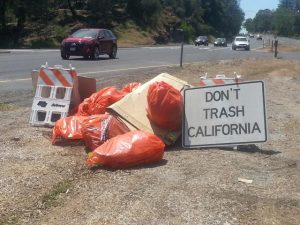 Sacramento, CA – Have you ever seen someone toss out a bag, cup or cigarette while driving down the highway?  Caltrans says that affects your wallet.

On Thursday, Caltrans will be holding its annual statewide Litter Removal and Enforcement Day.  Crews will be picking up trash along roadways in eight counties including Tuolumne and Calaveras.

Here is Caltrans list of highways in Tuolumne County where cleanup will take place:

Here is Caltrans list of highways in Calaveras County:

However, the costs are not only monetary; Caltrans say the litter also poses other risks. DaPrato says, “It’s an environmental hazard for not only humans, but our wildlife especially in rural areas in Tuolumne County.  Last year, the District collected nearly 2,045 bags of litter and debris.  That’s about 292 cubic yards.  That’s a lot of litter.”

Caltrans lists these litter threats to the environment and human health:

Caltrans has also started a new “Butts Only Boxes” campaign.  The boxes are being installed at rest stops along state highways so motorists can safely discard their used cigarettes.