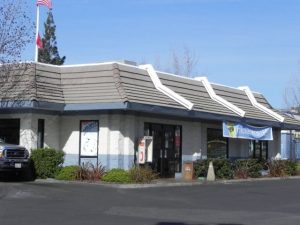 East Sonora, CA — A new restaurant is eyeing the McDonalds building in the Junction Shopping Center.  Dickey’s Barbecue Pit, a chain restaurant headquartered in Dallas, Texas, is looking to move into the building.

Center Manager Margaret Davis says, “It’s looks really good and as soon as the lease is signed we can formally announce it.”

Davis described the restaurant as fast food with table seating and a drive through. The closest Dickey’s restaurant is in Jackson. The owner of that restaurant, Richard Wolcott, confirmed he has a lease from the Junction Shopping Center, but declined further comment.

The McDonalds restaurant will close at midnight on April 26.  Davis says McDonalds will have a week to clear the building, and then Dickey’s could open in about two months after they get a building permit.

On another note, Davis says when the lease is signed that will leave only one space in the Junction open which is next to Compass Bank.