Rollover Crash With Pin-In In Columbia 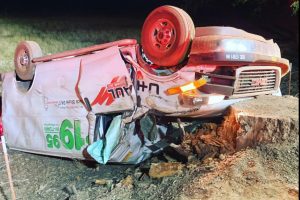 Columbia, CA – A late-night crash on Yankee Hill Road in Columbia left an Angels Camp man pinned inside a van.

When first responders arrived on the scene, they found a U-Haul rental van upside down and smashed into a large tree stump near Sawmill Flat Road. The CHP reported that the driver, 40-year-old James Johnson, was trapped inside the van. A Tuolumne County Fire Department (TCFD) crew assisted in the extrication of the Johnson. TCFD officials relayed, “The patient was extricated within 8 minutes of the engine crew’s arrival.”

Regarding the cause of the collision, the CHP detailed that for unknown reasons the van went off the roadway into a field and overturned several times. It then slid along the grass for a short distance, crashing into the stump, as can be seen in the image box photos. They added that Johnson was taken via ground ambulance to Adventists Health Sonora and treated, luckily, for only minor injuries.