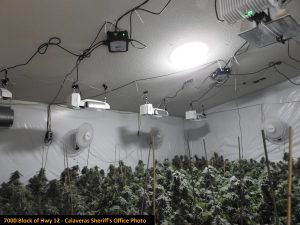 On September 29th a search warrant was served in the 4000 block of Hillvale Drive in Valley Springs. Deputies seized 419 growing plants with an estimated total value of over a quarter of a million dollars. Deputies also seized 2.7 grams of methamphetamine. Additionally, 14 firearms were seized, one of which had been stolen. No suspects were at the location. Evidence was collected and the investigation is ongoing.

On September 30th, a combined force of Marijuana Enforcement Units and California Department of Fish and Wildlife Officers served a search warrant in the 1500 block of Highway 12 in San Andreas. Officers seized 62 growing plants and 45 pounds of processed product with a  value exceeding $75,000. Officer seized 10 firearms at the scene. Several environmental violations were documented by the onsite CDFW scientist to include removing the river bedrock and water diversion. Evidence was collected and the investigation is ongoing.

At the start of October on the first, a search warrant was served in the 7000 block of Highway 12 in Wallace. Deputies seized 1,287 growing plants with an estimated value of $858,000. The residence had been converted to facilitate indoor cultivation. Calaveras County Code Enforcement responded to the scene to address violations. Junyun Ouyang, age 26 of Wallace, was placed under arrest and booked into the Calaveras County Sheriff’s Office on charges of 11366 H&S Maintaining a Place for Sells of a Controlled Substance and 182 PC Conspiracy to Commit Crime. The investigation is ongoing.