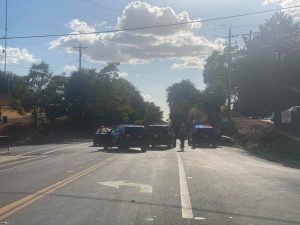 Tuolumne, CA– On the afternoon of Friday, October 9th Sonora Deputy Hammell was patrolling the area of Buchanan Road near Mira Monte Road in Tuolumne. Deputy Hammell spotted a man who was under a vehicle and heard a power tool being operated. As the Deputy got out of his vehicle to investigate, a woman in a nearby pickup truck yelled a warning to the man under the car. The man, 31-year-old Sean Foster of Jamestown, tried to jump into the truck but the deputy stopped him. Foster, who is wanted on a felony warrant, took off on foot. Deputy Hammell used his taser on the man after requesting several times for him to stop, he was then apprehended and searched with 650 dollars in cash and an ounce of meth being discovered in his possession. Sean Foster was booked into Tuolumne County Jail for possession of drugs for sale, resisting arrest, and his previous two felony warrants.

The driver that attempted to warn the suspect, 19-year-old Abigal Rogers of Sonora drove away from the scene. Responding deputies caught up to Rogers on Tuolumne Road where they tried to stop her. Rogers led deputies on a chase that reached up to 90 mph. Sonora area CHP ended the chase on Mono Way and Sanguinetti Road in Sonora. The pickup ended up being stolen with three ounces of meth in the vehicle. Rogers was booked into County Jail on charges related to the pursuit and possession of the stolen vehicle.

Deputies are attempting to contact the owner of the vehicle Sean Foster was seen under, the vehicle was a red, 90s model Ford pickup truck. If you know someone who was parked in that area and has a vehicle that matches the description you are encouraged to contact Deputy Hammell at 209-533-5815