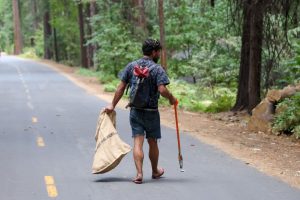 Volunteer picking up trash in the park

At the end of September, the park joined forces with the Yosemite Climbing Association to hold its annual Yosemite Facelift where volunteers scour the park and picking up left behind trash. This year it was an in-person and a virtual event. More than 770 individuals donated their time collecting 3,361 pounds of trash during this year’s event. Those that attended followed all COVID protocols.

Additionally, the park’s historic preservation team just completed an extensive restoration of The Ahwahnee gatehouse with the reinstallation of its sign. Park officials relayed that the original sign “disappeared” in 2016. Surprisingly, a similar occurrence happened when the original sign was installed in 1930. As the photos in the image box show, It included an eagle on top which one year later went missing. Park officials detailed that in order to recreate the original sign, staff dug into the archives and found an original to-scale sketch of the eagle and contracted with a local blacksmith to re-create the sign.