Update: A High-Speed Chase Through East Sonora and Sonora Ends In Crash 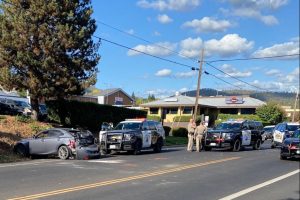 Update at 5:35 p.m.:  The CHP has released new details to Clarke Broadcasting related to a high-speed chase through East Sonora and Sonora that ended in a crash and shut down a section of Mono Way this afternoon.

The CHP updates that a Tuolumne Sheriff’s Deputy on patrol in Tuolumne recognized a wanted felon, Sean Foster, who was under a Ford pickup allegedly trying to steal its catalytic converter. When the deputy approached, a female accomplice in a Dodge pickup took off, sparking the pursuit.

The chase reached speeds of 90 mph while racing past Summerville High School on Tuolumne Road heading towards the Junction Shopping Center and ended by the Sonora Plaza and Barrow’s Cafe and Grill at Mono Way and Sanguinetti Road. During the pursuit, the CHP reports the pickup crossed the double-yellow lines repeatedly while passing other vehicles. The chase came to a screeching halt when the pursued driver smashed into a Lexus sedan at the intersection.

Mono Way was shut down between Hospital Road and Greenley Road for about half an hour while tow crews removed the wreckage. Luckily, the CHP reported no injuries in the collision. Arrested at the scene was 19-year-old Abigale Rodgers. Foster, was also taken into custody.

Update at 5 p.m.: Sonora Police have reopened Mono Way after a pursuit ended in a crash at the Sanguinetti intersection near the Sonora Plaza this afternoon.

Update at 4:30 p.m.:  First responders remain on the scene where a pursued vehicle smashed into another vehicle at Mono Way and Sanguinetti.  Mono Way was shut down by Sonora Police from Greenely Road to Hospital Road but officers have now reopened all but the westbound lane to traffic with tow crews working to remove the vehicles. Further details on the chase can be viewed below.

Original post at 4:15 p.m.: Sonora, CA — First responders are on the scene of a high-speed chase through East Sonora and Sonora that has ended in a crash.

The chase that reached speeds of 90 mph began on Tuolumne Road near Summerville High School heading towards the Junction Shopping Center and ended at the Mono Way and Sanguinetti intersection, by Sonora Plaza and Barrow’s Cafe and Grill. The CHP reports the silver Dodge pickup crossed the double-yellow lines repeatedly while passing other vehicles during the pursuit. It ended when the driver, a female, hit another Lexus sedan at the intersection. An ambulance has been called to the scene.

Sonora Police have closed Mono Way from Greenley Road to Hospital Road. They are asking motorists to avoid the area if possible. An update will be provided as soon as new information comes into the newsroom.