Was A Groveland Man The Notorious Zodiac Killer? 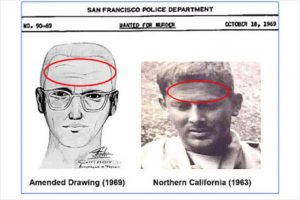 Groveland, CA – Could the infamous “Zodiac Killer,” who shot, stabbed, or choked his victims and sent coded letters to newspapers taunting law enforcement, really have been living in the quiet town of Groveland?

While some of those cryptic notes have yet to be decoded, a group of independent investigators called “The Case Breakers” claim they have uncovered the serial killer’s true identity. The report has gained international attention over the past 24 hours. They assert that the sadistic killer is Gary Francis Poste, a retired Air Force veteran, house painter, and Groveland resident. However, he cannot defend himself or be questioned because he died in 2018. Two years earlier, Poste was arrested by Tuolumne County Sheriff’s Deputies in February of 2016 for corporal injury to a spouse, and his mugshot from that arrest is in the image box photos.

The group, made up of  about 40 former law enforcement investigators, journalists and military intelligence officers, say “physical and forensic evidence,” as well as recovered photos from Poste’s darkroom led to this conclusion. A picture of Poste with the same forehead scar as the one in the police sketch of the Zodiac Killer can be viewed in the image box.

The notorious Zodiac Killer is linked to five murders taking place from 1968 to 1969 in the Bay Area, but the cold case sleuths insist he is also responsible for a sixth-slaying. That of an 18-year-old student, Cheri Jo Bates stabbed 42 times outside a school library in Riverside in 1966. The group put out a press released Wednesday calling for police there to release refrigerated hair, skin and blood found under the victim’s fingernails for DNA testing. But they say that “Riverside police are ‘100% sure’ that Bates was killed by someone other than the Zodiac” and refuse to release any of that evidence.

The Case Breakers say they also interviewed a man who claimed that  he grew up in Groveland and was one of Poste’s so-called Zodiac’s criminal “posse.” They say he recounted that Poste liked to kill animals.

The FBI’s San Francisco division is not on board with the group’s theory. It put out a statement that the Zodiac Killer case is still open and there was no new information to share.