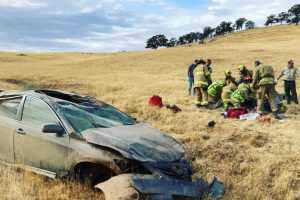 Update at 5:15 p.m.: The CHP reports that a tow crew is working to remove the solo vehicle that crashed on  Highway 108 near Tulloch Dam Road this afternoon. They add that traffic is moving once again. Just before 4 p.m. a sedan in the westbound lane went off the roadway about 50 feet into a field and then overturned, ejecting one person. That individual was flown to a Modesto hospital from the scene suffering major injuries.  Further details on the crash are below.

Original post at 4:24 p.m.: Tuolumne County, CA — First responders are on the scene of a solo vehicle crash on Highway 108 between Keystone and Knights Ferry in Tuolumne County.

The wreck happened just before 4 p.m. near Tulloch Dam Road. The CHP reports that a sedan was westbound when it went off the roadway into a field and overturned. They add that one person was ejected from the vehicle and is unresponsive, suffering a head wound. An air ambulance has been called to the scene as the CHP reports major injuries in the crash. The lanes are not blocked but traffic is backed up due to emergency vehicles and personnel on the shoulder. An update will be provided as soon as new information comes into the newsroom.