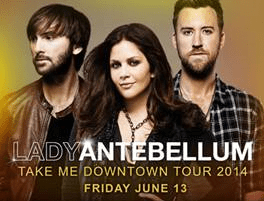 Murphy, CA — Ironstone Vineyards has announced its summer concert series of Grammy winners. Taking the stage at the Ironstone Amphitheatre will be Grammy winners Lady Antebellum in June with a special guest not yet announced. Then in August, ZZ Top and multiple Grammy winner Jeff Beck will rock the house.

Ironstone General Manager Bruce Rohrer says due to a switch in promoters, which gave them a late start in finding acts, there are only two concerts scheduled.  Ironstone has gone back to using Richter Entertainment Group after using another promoter the past two years.

Rohrer says,   “They [Richter] had made Ironstone rise to the top 75 in the pollsters ranking for amphitheaters.  We went back with them because they bring quality not necessarily quantity.”

The Lady Antebellum concert is June 13 and ZZ Top along with Jeff Beck is August 15.  Tickets go on sale April 11 through Ticketmaster.

As to whether any other concerts could hit the stage this summer Rohrer says, “You never know. If we can pull something out, we will.  Yeah, were always actively looking to see who’s available.”

In addition, Black Oak Casino will once again be a major sponsor of the concert series.