Five Illegal Pot Grows Worth A Combined $2.68 Million Shut Down 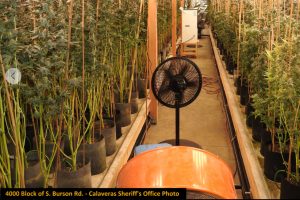 The first two searches were on Sept 14th. One in the 1800 block of Liberty Valley Road in Railroad Flat where deputies seized 462 growing pot plants, but no suspects were located. The second was on Michel Road in Mountain Ranch with 508 growing marijuana plants and two firearms seized. Phanh Saivong, 51, of Visalia, was cited.

The next day, a search warrant was served in the 6300 block of Old Gulch Road in San Andreas where 974 plants were eradicated. Sheriff’s officials relay this property was also raided in 2019 and 399 plants were seized. One suspect, Kevin Leonel Casillas, 23, of Tomatlan, Mexico, was cited.

The third day of raids consisted of two properties, one in the 3800 block of Highway 12 in Burson with 267 plants and no suspects found. The other was in the 4000 block of South Burson Road in Valley Springs. At the site, deputies found a large metal shop on the property that had been converted into a marijuana grow. Up and running in the shop were two growing rooms, several other areas including the upstairs were under construction to become growing areas. A total of 1,000 plants were growing in the shop. Two Valley Springs residents, Yani Wu Dewu, 47, and Aipeng Qu Feng, 48, were cited.

Illegal marijuana operations can be called into the Sheriff’s Office Anonymous Marijuana Tip Line at (209) 754-6870.