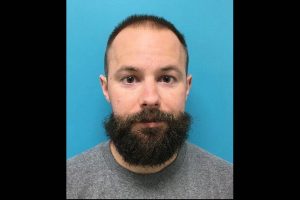 After serving a search warrant Tuesday morning in the 6000 block of Melones Court, Tuolumne County Sheriff’s Detectives took 33-year-old Samuel Patrick Masquelier into custody without incident. The arrest report lists Masquelier as a park ranger but did not indicate where. Clarke Broadcasting inquired about his employment to sheriff’s spokesperson Robert Nikiforuk, he replied via email, “According to detectives he is unemployed.”

Assisting in the arrest was the sheriff’s SWAT team. Regarding why that team was called in to assist, Nikiforuk responded, “Sometimes the risk of a search warrant can be a higher level and this particular case and circumstances met that high-risk level.”

When asked if that risk included possible weapons such as a gun, Nikiforuk detailed, “For this particular case, I do not know.  Possession of any weapons can make it higher risk, along with criminal history and those type of things.”

The warrant was for evidence related to a child molestation case, involving one victim, according to Nikiforuk.  What that evidence is was not released. Masquelier was arrested for lewd and lascivious acts with a child under the age of 14 for sexual purposes.  He was released on bail for $100,000.