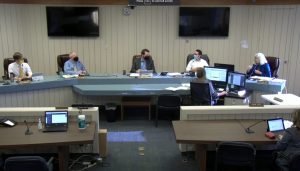 Sonora, CA — The Tuolumne County Board of Supervisors spent much of the morning session hearing an update about the latest COVID-19 numbers, and then giving personal opinions themselves, and hearing comments from the public.

It was noted that the number of COVID cases has been declining over the past couple of weeks following a late summer surge due to the Delta Variant. Public Health is continuing to urge people to take safety precautions and to get the vaccine.

After the presentation, District Three Supervisor Anaiah Kirk said he was disappointed Interim Health Officer Dr. Eric Sergienko was not in attendance, as he has several questions for him. Supervisor Kirk noted some of which are related to concerns he is hearing in the community about a new state health directive that will require school students to receive the COVID vaccine.

It was noted that Dr. Sergienko was requested to speak before the Mariposa County Board of Supervisors as well today, where he is also the Health Officer. Kirk requested that the board postpone the monthly COVID updates in the future if Dr. Sergienko has scheduling conflicts. There was consensus among the board to go in that direction.

District Four Supervisor Kathleen Haff was again critical today of the COVID vaccine and some of the related information provided about it.

She argued that more emphasis should be placed on the number of people who have recovered from COVID, as opposed to current cases and deaths.

She added, “I want to start letting people know that for most people this is a recoverable disease. And this may sound harsh because people are still dying, but I even question why we are still calling it a pandemic and why it is an emergency situation. Because only 0.2-percent of the people actually die.”

Her statement received applause from some members of the public in attendance.

Haff also praised treatments like monoclonal antibodies and ivermectin, and criticized the “mass media” for failing to accurately cover COVID-19.

About a half dozen community members went up and spoke during the public comment portion, and most were voicing displeasure with any type of vaccine mandate. One argued that Health Director Jachetta was telling lies about the pandemic.

District Five Supervisor Jaron Brandon defended the public health staff and also raised concerns about the tone of the conversation.

Noting, “If we want to have it out up here, every month, that’s fine. But, I thought we wanted to have these be public health updates.”

Continuing, “And when we want to make a direction, or have those discussions, we schedule it ahead of time. I think we could argue about this (COVID) for three hours every single month, and that’s not doing anybody any good.”

Campbell stated he is personally vaccinated, and indicated that his children will also be vaccinated from “preventable diseases,” arguing it is it what a “responsible parent does.”

Campbell concluded, saying, “I don’t think this is really the forum to have a discussion about the basic science behind viruses. I don’t see where this is going to have this discussion every single month.”

No action was taken today related to COVID-19.