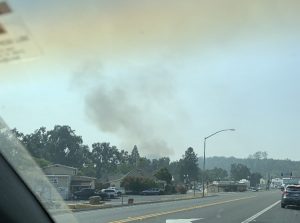 Update at 12:50 p.m.: Multiple fires burning on Highway 108 between Rolling Hills Blvd and Victoria Way in Jamestown have been extinguished. CAL Fire reports that there were two fires total. One by the intersection of Victoria Way was just a spot fire that citizens were able to put out in minutes. A second fire closer to Rolling Hills Blvd grew to a half-acre before firefighters were able to contain it.

The CHP has shut down that section of the highway, which they say will be opening shortly. They also noted that a big rig may have sparked the blaze after pulling over along the shoulder and its load fell. There is no information regarding what the semi was hauling.

Original post at 12:30 p.m. written by BJ Hansen: Jamestown, CA — Fire officials are responding to a report of multiple fires on Highway 108 near Rolling Hills Blvd in Jamestown.

Air and ground resources are responding. There are not any immediate reports of any structures being in danger. Be prepared for activity in the area. The CHP reports that a big rig truck is pulled over in that area, and it could responsible for the incident, as a load fell from it.  We’ll pass along more information as it becomes available.”