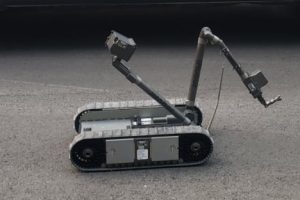 Pine Grove, CA – A suspicious package was discovered at an Amador County park and the Calaveras Sheriff’s bomb squad was called in to assist.

It was just before 2 p.m. last Saturday when Amador County Sheriff’s Office got a call related to a suspected explosive device at the Chaw’se Indian Grinding Rocks Park.  Deputies evacuated the area and set up a perimeter where the device was found. Then the Calaveras County Sheriff’s Office Explosive Ordnance Disposal Team (EOD) was notified.

After inquiries by Clarke Broadcasting, Calaveras sheriff’s spokesperson Lt. Greg Stark detailed, “The suspicious package was in a trash can. It was a plastic sports drink bottle wrapped with black tape with a fuse or what appeared to be a fuse in the cap.”

The device was neutralized a short while later. Lt. Stark relayed, “EOD does not believe the content inside the bottle was an explosive substance. However. Amador sheriff’s office is sending it to the DOJ (Department Of Justice) for analysis.”

How the bottle got into the garbage can and any suspect leads are being handled by the Amador sheriff, according to Lt. Stark. Amador sheriff’s officials relayed, “The investigation is ongoing and there is no additional information to release at this time.”