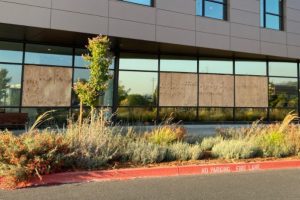 Sonora, CA – A vandalism suspect was literally caught red-handed with the evidence in his hands when Sonora Police arrived.

Sonora Police officers responded to the Adventist Health Sonora Health Pavilion and  Diana J. White Cancer Institute on Mono Way last Saturday afternoon for a report of a male subject throwing items at the windows. The caller noted that the subject was wearing a teal-colored OSH shirt. An officer found the suspect matching that description in the front parking lot with a large rock in his hand, preparing to throw the rock at a window of the building, according to police.

The suspect, 39-year-old Terry Hughes, listed as a transient by police, was ordered by officers to put the rock down and he complied. Officers then told Hughes to walk towards them. Instead, they say he started to back up and then suddenly turned around and ran up Greenley Road. He did not get far before officers caught and cuffed him.

Officers discovered a total of five broken windows at the center, as pictured in the image box. Hughes was arrested for vandalism and resisting a peace officer. He was placed on a $15,000 bail.