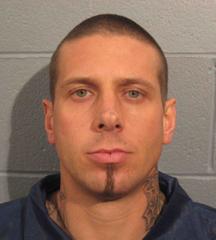 Detectives are looking for 37-year-old Shawn Jonathan Melcher. He is wanted for various felony charges including attempted murder, assault with a deadly weapon, domestic violence, child endangerment, and evading a peace officer.

Deputies responded to a report of an assault with a deadly weapon at a home on the 10000 block of Hogan Dam Road in Valley Springs. The incident happened last Tuesday around 8 p.m. Sheriff’s Officials say the caller told them Melcher got into an argument with a female and allegedly held a handgun to her head.

While headed to the home, a deputy spotted Melcher’s vehicle driving away on Hunt Road near Highway 4 and started chasing him. Melcher then turned around and headed back towards the home. Meanwhile, another deputy had parked his patrol car by the home. He was standing by the patrol car when Melcher sped towards him and tried to run him over. Sheriff’s Officials say that is when the deputy, fearing for his safety, fired one riffle shot towards the vehicle. Neither Melcher nor the vehicle was hit. Deputies then chased Melcher to a wooded area near the home. His vehicle crashed, becoming wedged in between two trees and he took off on foot.

Melcher is known to frequent the Valley Springs area. Investigators say he has tattoos on his neck and one on his chest that says “Melcher”.

The deputy who fired his weapon has been placed on paid administrative leave.