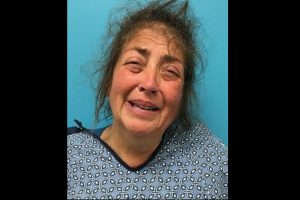 Mi-Wuk Village, CA – Two hot pursuits by deputies in one day with the first beginning in Mi-Wuk Village on Highway 108 and the second ending on Highway 120 at the Yosemite National Park gate with the woman handcuffed.

A report of a suspicious sedan parked in the Sonny’s Mini Mart parking lot located on Highway 108 in Mi-Wuk Village last Monday around 1:15 p.m. brought Tuolumne County Deputies to the scene. While contacting 51-year-old Michelle Vermon-Vondra of Sacramento, deputies noticed signs of “possible impairment,” according to sheriff’s spokesperson Nicco Sandelin. When informed she would be given a sobriety test, Vermon-Vondra started her car and took off. Deputies pursued her down Highway 108 and Sandelin noted that she observed all traffic laws in the process.

While waiting at the stoplight on Highway 108 and Mono Way, deputies attempted to block Vermon-Vondra’s vehicle in with theirs. Sandelin says that is when she hit the gas and struck one of them to get away. Deputies once again gave chase. This time she reached speeds over 90 mph while passing vehicles in the oncoming lane, prompting deputies to terminate the pursuit for public safety reasons. Sandelin relays that, at that point, a “be on the lookout” was issued for her vehicle.

A short time later, Vermon-Vondra passed another deputy patrolling along Highway 120 towards Groveland. The deputy followed her through Groveland and just past Tenaya Elementary School attempting to stop her for a second time, but she refused to stop and continued east on Highway 120. Vermon-Vondra was forced to halt at the Yosemite gate but remained in her sedan. After several minutes of negotiations, she eventually surrendered and was taken into custody. Vermon-Vondra was arrested for assault with a deadly weapon on a peace officer and evading. She was placed on a $50,000 bail.

Sandelin added that alcohol nor drugs ended up being a factor in the case. It is unclear why Vermon-Vondra ran from deputies.