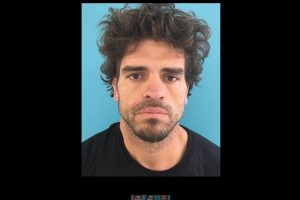 Jamestown, CA – Noticing a man in the parking lot just sitting in a vehicle for a while, a local gas station clerk requested Tuolumne Sheriff’s Office Deputies escort him off the property – not only did the suspect resist but the vehicle was not his.

Deputies were called to the Chevron Gas Station on Highway 108 in Jamestown on Thursday around 3:22 p.m. for a suspicious person. When they arrived, they found 35-year-old John Selby of Lodi inside a vehicle in the parking lot. As deputies approached Selby, they noticed he was agitated and confrontational.

Sheriff’s officials detailed that Selby refused the deputies’ multiple orders to leave the property. Subsequently, they attempted to pull him from the vehicle, which he resisted, but then eventually complied. A .38 caliber round was found in Selby’s pocket after being searched, which is a violation of his probation. A record check of the vehicle determined it had been reported stolen.

Selby was arrested for possession of a stolen vehicle, trespassing, resisting arrest, and prohibited person in possession of ammunition. His bail was set at $10,000.