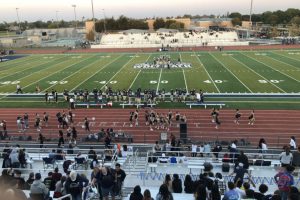 Both high school football teams played away games but that did not stop them from tearing up the gridiron.

Wildcats Roll to Easy Road Win. A road trip to Tracy proved to be worth the long drive as Sonora dominated the host West Wolfpack by the score of 49-0 Friday night.

Sonora received the opening kickoff and took only two plays and less than a minute of game time to score their first touchdown, a 38-yard run from Clay Woolridge.  After the Wildcats defense forced a quick three and out, the Wolfpack punter shanked the ball for a punt that netted only two yards.  Sonora capitalized on the short field with a 6-play drive, finished by a 6-yard push for the touchdown by Cooper Moburg.  Another Wolfpack 3 and out on the ensuing possession, followed by a high snap on the punt, gave the Wildcats the ball on the West 15-yard line.  A few plays later quarterback Bradley Curnow dove in for a 1-yard score to put the Wildcats up 21-0 as the first quarter expired.

The second quarter saw the Wolfpack offense and special teams continue to struggle with multiple 3 and outs and short punts.  The Wildcats capitalized, delivering a 36-yard touchdown pass to Chase Pimentel on one drive and a 55-yard touchdown run from Kade Clifton on the next.  West finally managed to put a drive together late in the second quarter with a few long passes and got the ball to the Sonora 1 yard line before the Wildcat defense stepped up with a goal-line stand, denying the Wolfpack a score.  Sonora then delivered the knockout blow with a 98-yard touchdown drive to close out the half, punctuated by a 15-yard run from Cooper Moburg.

The second half saw a running clock and more defensive dominance by the Wildcats.  West managed a few deep passes but never threatened as Sonora preserved the shutout.  A 3rd quarter touchdown by Kaden Alford punctuated the Wildcat win.

Sonora improves to 2-3 on the year.  The Wildcats wrap up non-league play next week as they return home to face Stellar Prep of Hayward.

The Summerville Bears played an outstanding game against the Big Valley Christian Lions to win their first game of the season, 42 to 7, Friday night in Modesto. The Bears had the ball for seven drives during the game and they cashed in with a touchdown on the first six. All the Bears’ scoring was on the ground, three TDs by Kai Elkins, two by Leon Tippett, and one by Tommy Warfield. They were ahead 28 to 0 at the end of the first half and never looked back.

Tippett was awarded the player of the game. He played an outstanding game on defense and scored the two touchdowns on his only two runs of the game, one for 15 yards and the other for 30. The Bears, now 1 and 2 on the season, will play in Atwater next Friday against the Stone Ridge Christian Knights.