Angels Camp Police Mourn The Loss Of A K9 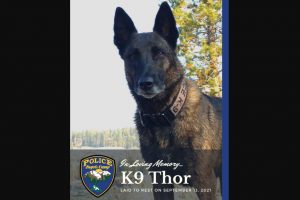 San Andreas, CA – Sadly, Angels Camp Police announced they “laid to rest one of our own” — a four-legged officer.

Although K9 Thor, a Dutch Shepherd, had retired in January of last year, as reported here, his death was still felt deeply by the department.  With his handler, Officer McDearmid, by his side, Thor passed away on Monday. Police relay the dog lost his battle with a sudden illness but did not relay what that illness was.

Angels Camp Police acquired Thor in 2016 from the Stockton Police Department for $4,000 paid for by the Angels Camp Police K-9 Association, as detailed here. He was cross-trained for both patrolling and narcotic detection work. Throughout his four years of service, he sniffed out drugs and guns while also chasing down suspects that took off on foot. Police remembered one of K9’s most memorable assignments was working alongside Officer McDearmid at area schools. They detailed that students and school staff shared many stories over the years of K9 Thor’s “friendly demeanor and how much they enjoyed having him on campus.”

In his retirement years, Thor lived with Officer McDearmid and her family. Police officials noted, “He will be missed by all who knew him.”