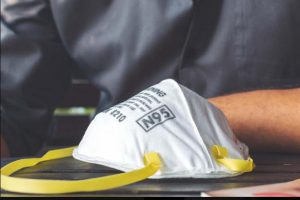 Sonora, CA — In light of a rise in local COVID cases in the community, the Sonora City Council was asked by staff if it would like to again require face coverings at all city-owned buildings, and also whether to limit capacity at city buildings to 50. The latter would impact popular gathering spots that can be rented by community members such as the downtown opera hall.

The city has not recently been requiring masking at its public buildings, and because of this, council members Ann Segerstrom and Colette Such have chosen to attend meetings virtually, rather than in person. Mayor Matt Hawkins questioned both if they are now willing to attend in person since masks will be required. Segerstrom said she will start attending person. Such responded that she would also likely return, with the stipulation that everyone is wearing the mask over their nose, including audience members.

Those in favor of giving the city administrator authority to implement health directives were councilmembers Segerstrom, Such and Garaventa. Mayor Hawkins was opposed, and councilmember Mark Plummer was absent.

Shortly before the vote, Mayor Hawkins stated, “I want to make it very clear to the public, and our city employees that this is not any kind of a mandate of a forced vaccination, because I know it will be misconstrued, and not a ‘Nazi show your cards’ situation.”

Then explaining his opposition, Mayor Hawkins said that most people who contract COVID-19 also get an upset stomach. Adding, “What happens when you get sick to your stomach? You pass a lot of gas. The masks don’t stop the gas, and that is one way you can be contagious. That is science, and it is a fact.”

Also related to COVID-19, at the meeting there were complaints made in public comments about the city’s ending of an emergency ordinance over the summer that allowed for increased outdoor dining in public walkways and other spaces. Specifically, the city was criticized for removing tables that were set up by the Diamondback Grill. Councilmembers collectively indicated a desire to find a balance at a future meeting where businesses may potentially be allowed to rent out space in public areas, for a fee, so that more outside dining can continue.

The other item that members of the public complained about during public comments is the city’s increasing homeless problem and associated issues.