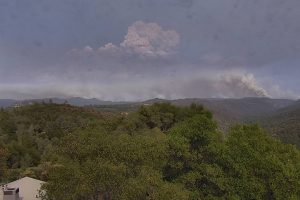 Update at 5:35 p.m.: Two civilians have been seriously injured in the Grizzly Flats area where the Caldor Fire is burning in El Dorado County. CALFire is reporting that the injuries happened overnight. They detail that both had to be flown from the area to a local hospital.  No details were given on their injuries or current conditions.  One of the victims approached firefighters asking for help.  CAL Fire put out this warning to the public, “It is imperative for those within areas under an evacuation order or warning to follow the direction immediately.”  The fire is now estimated to be 30,000 acres in size and 86 structures have been destroyed. Additional evacuations have been ordered for the Pollock Pines area.

The Forest Service reports that the Caldor Fire is now 6,500 acres and there is no containment. 242 firefighters are assigned to the incident. It is burning in heavy timber and steep terrain. An evacuation order has been called for many areas directly around the fire in El Dorado County. It is burning four miles south of Grizzly Flats and two miles east of Omo Ranch. The image posted is from PGE’s Alert Wildfire North Mokelumne camera situated in Calaveras County. Hot and dry conditions are anticipated again today. The fire was first spotted on Saturday evening. 2,010 structures are threatened.