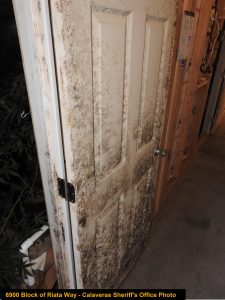 The searches were carried out during four days in July by the Calaveras County Sheriff’s Office Marijuana Team. The first two were on Wednesday, July 7. One was in a metal outbuilding in the 6900 block of Riata Way in Angels Camp where 617 growing marijuana plants with an estimated value exceeding $802,000 were seized. Sheriff’s officials report it was “Red-Tagged” due to numerous hazards and violations which created an unsafe environment including “extensive black mold that was visible on surfaces.”

The second was in the 1900 block of Liberty Valley Road in Railroad Flat. Deputies seized 40 growing marijuana plants, 146 pounds of processed marijuana with an estimated value exceeding $65,000. The team also uncovered more than 7 grams of suspected cocaine and 62 grams of suspected psilocybin mushrooms. A citation was issued to one man, 41-year-old Sean Donohue of Railroad Flat, who was found on the property.

The next day, Thursday, July 8th, 2021, a raid in the 8000 block of Hedgepeth Road in Valley Springs raked in 236 growing marijuana plants with an estimated value of more than $236,000 and a firearm. A citation was issued to 46-year-old Valley Springs resident, Nancy Khom Bun.

Then on Wednesday, July 14th, the team hit an outdoor grow property on Panhandle Road in Glencoe. Deputies seized 389 growing marijuana plants and 67 pounds of processed marijuana estimated at over $319,000.

The next day (July, 15) they headed back to Valley Springs where a home had been converted into a grow in the 800 block of La Contenta Drive. At this site, 530 growing marijuana plants and 54 pounds of processed marijuana were taken with an estimate worth of $759,000. It was also “Red Tagged” for hazards and code violations. Three suspects Jinlong Chen, 33, of Santa Cruz, Lingwen Wu, 36, of Valley Springs, and Jianming Yu, 32, of Sacramento, were arrested at the scene.

Sheriff’s officials remind that if you suspect or know of an illegal marijuana operations call the Sheriff’s Office Anonymous Marijuana Tip Line at (209) 754-6870.