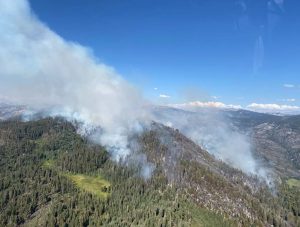 Yosemite, CA — The TilTill Fire north of Hetch Hetchy is up to 1,610 acres.

As of this morning, Yosemite National Park reports that there is 45-percent containment. It was ignited by a lightning strike late last month and first discovered on July 31. 56 firefighters are assigned to the incident. The immediate fire area, and surrounding trails, are closed until further notice.

The second-largest incident, the Lukens Fire, is 510 acres and 85-percent contained. It is situated west of Lukens Lake and north of Tioga Road. Officials are using a “confine and contain” strategy. It was first spotted on June 28.

Meanwhile, the 224 acre County Line Fire is 100-percent contained. It is located near the Yosemite Creek Campground. It was first located on June 28.

All of the fires are determined to be lightning-caused.