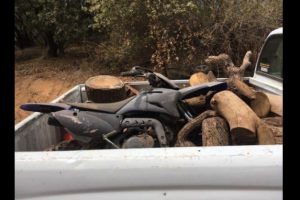 Sonora, CA – A Tuolumne man returned to a property he allegedly burglarized before, and on top of that was using a stolen trailer to pilfer more loot.

Tuolumne County Sheriff’s Detectives were following up on leads regarding recent theft cases at a property on Morris Road in Sonora. They returned to the property last Saturday to find 37-year-old Daniel Foote loading scrap into a trailer.

While questioning Foote, a record check on the trailer revealed it was reported stolen. A quick look around the property also uncovered a stolen off-road motorcycle loaded in the bed of Foote’s pickup, which can be viewed in the image box picture.

Foote had prior theft warrants allowing for him to be searched, which turned up drug paraphernalia. That led to a check of his truck where just under an ounce each of suspected methamphetamine and heroin was found along with drug sales-related paraphernalia.

Foote was subsequently arrested without incident for his various warrants, possession of methamphetamine and heroin for sale, drug paraphernalia and having stolen property.