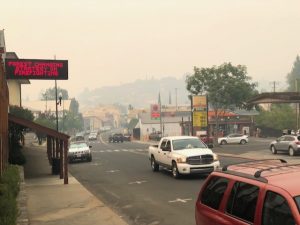 Blanket of smoke over Sonora

Update at 3:15 p.m.:  It appears to be a combination of two fires is bringing smoky skies to the Mother Lode. There are numerous blazes burning throughout the state, including the 432,000 acre Dixie Fire northeast of Sacramento, which CAL Fire tells Clarke Broadcasting is bringing drift smoke into Calaveras and Tuolumne county areas. They add that dispatch is being inundated with calls regarding the hazy skies and ask that it not be called in as a wildfire. Additionally, the Calaveras County Health Officer and Calaveras County Air Pollution Control District have issued a joint air quality advisory noting the “potential for poor air quality conditions primarily due to smoke from the Dixie Fire in Plumas County and the Tiltill Fire in Yosemite.” The advisory will remain in effect until Tuesday (August 10)at 1 p.m. They advised that it “may be extended depending on conditions.”

“If you can see or smell smoke, try and avoid unnecessary outdoor activities. Poor air quality caused by the nearby fires can lead to health problems especially for those at increased risk which include people with chronic health conditions, those over 65 years old, and those who have or those who are recovering from COVID-19,” said Dr. René Ramirez, Calaveras County Health Officer, adding, “People at higher risk should take steps to lessen their exposure to smoky air.”

In Tuolumne County, the EPA Air Quality Index indicates much of the smoke in the county, including in Sonora and its surrounding areas, is coming directly from the Tiltill Fire, which is 520 acres and 15-percent contained.

To view the smoke in the Mother Lode click here for live webcams in the area.

Original post at 9:32 a.m. written by BJ Hansen: Sonora, CA — An increasing amount of smoke has been drifting through the Mother Lode this morning.

While there are numerous fires burning throughout the state, including the 432,000 acre Dixie Fire northeast of Sacramento, the EPA Air Quality Index indicates that the local smoke is coming from the Tiltill Fire in Yosemite National Park (see image box).

The latest estimate from the National Park Service is that the fire north of Hetch Hetchy in Tiltill Valley is 520 acres and 15-percent contained. There are 20 firefighters assigned to the incident. In recent days they have been facing very hot and dry conditions. Several trails immediately around the fire area are closed.