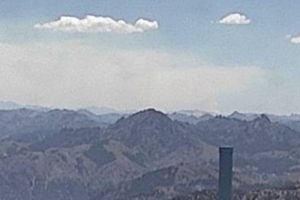 Update at 1:45 p.m.: Stanislaus National Forest dispatch has been flooded with calls of possible fires in the vicinity of Pinecrest stretching to the Groveland area. Clarke Broadcasting also received similar calls, so we contacted forest fire officials who relayed that it is smoke from the lightning strike Tiltill Fire burning near Tiltill Valley, north of Hetch Hetchy. They detailed that several smoke checks in the area turned up no fires. Instead, they report the winds have kicked up a bit in the area of the blaze and causing drift smoke in those areas.

Original post at 11:15 a.m. written by BJ Hansen: Yosemite, CA — Some containment has finally been gained on the 197-acre Tiltill Fire burning in Yosemite National Park.

The lightning-caused fire is located near Tiltill Valley, north of Hetch Hetchy. 20 firefighters are assigned to the incident.

Yosemite Superintendent Cicely Muldoon has issued an order to close trails immediately around the fire area so that firefighters can move around unimpeded. Click here to view the map. The order notes that there are an increased number of hazards within the fire area, including falling limbs and snags, poor visibility and hot ash.

As officials are using a “full suppression” strategy to fight the Tiltill Fire, they are also still monitoring the Lukens Fire west of Lukens Lake and north of Tioga Pass. The lightning-caused fire located on June 28 is 466 acres and 50-percent contained. The fire is in a very isolated area at an elevation of 8,243 feet. They are using a “confine and contain” strategy and allowing it to burn out more naturally.