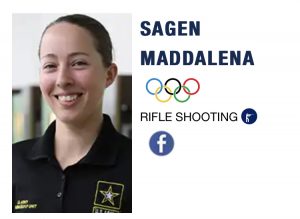 Groveland, CA — A US Army sharpshooter who grew up in Groveland had a very successful appearance at the Tokoyo Olympics.

It was her first time competing in the Olympics.

Switzerland’s Nina Cristen took home the Gold medal in the event after topping the leaderboard after each of the elimination rounds. A video recap of the competition, from NBC Sports, can be viewed here.

The USA shooting team reports that Maddalena started shooting with her local 4H club, and her grandfather was also influential in teaching her patience. She was a member of the Mother Lode Gun Club.

She walked on in 2013 and made one of the top NCAA rifle teams in the country, the University of Alaska Fairbanks. She later enlisted on active duty in March of 2019 and was assigned to the US Army Marksmanship Unit at Ft. Benning as a shooter/instructor.