DUI Suspect Makes It Easy For CHP To Arrest Him 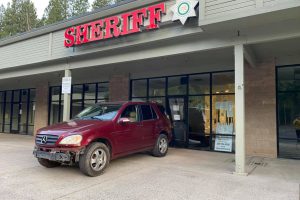 Arnold, CA – CHP officers made an easy DUI arrest in Arnold early this morning, as the suspect crashed right into the Calaveras County Sheriff’s Substation office.

Around 4:41 a.m. an alarm signaled a break-in at the substation in the Meadowmont Shopping Center off Highway 4. Deputies were first to arrive, and they discovered a 2002 Mercedes SUV had crashed into the front of the building. The force pushed the windows, glass front door, and their frames in about an inch.

To the deputies’ surprise the driver, 34-year-old Christopher Bates of San Andreas was still behind the wheel. When CHP officers arrived to investigate the collision, they determined Bates was under the influence of drugs and arrested him. What types of drugs were not immediately known.

Luckily, no deputies were manning the substation at the time. Bates admitted to backing into the office and according to the Ebbetts Pass Fire Fighters Association crew that responded to the scene, Bates stated, “He needed to use the phone that was inside the sub-station.”