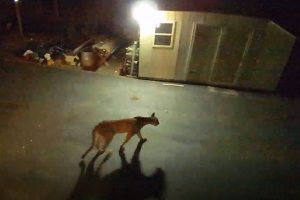 Jamestown, CA – Doing his daily chore of checking what the security cameras footage captured overnight, a Jamestown man got a surprise.

Crossing over a roadway towards a shed in the Mill Villa Estates, off Highway 108/49,  near Mill Vista Circle and Rail Vista Lane by the railroad tracks, a mountain lion casually strolled on by and then disappeared into the night. The man did not want to be identified, but he noted that the video was recorded at 2:55 a.m. on Thursday.

Ironically, the cameras had just been put up three weeks ago. The man says he has never seen a cougar in the area before. When asked by Clarke Broadcasting in an email his reaction when viewing the video for the first time, he responded. “I was just checking night videos and was surprised to see it, especially at the way it moved around so comfortably. Beautiful, but very dangerous, thought people should know.”

Of note, in March a mountain lion was spotted in the Sonora City limits, as reported here with tips on what to do if you come face-to-face with a cougar and how to coexists with these big cats.