Update: Stretch Of Highway 4 Now Closed Due To Tamarack Fire 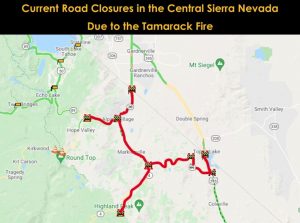 Update at 11:50am: A portion of Highway 4 is now closed due to the Tamarack Fire in Alpine County. The closure runs from Ebbetts Pass to Highway 89. Also, officials are now estimating the fire to be just over 50,000 acres and there is four percent containment.

Original story posted at 6:34am: Markleeville, CA — The 43,900-acre Tamarack Fire has been threatening the Highway 395 corridor.

The Incident command reports that it is being held west of Highway 395, and a strong amount of resources is assigned to that area. Officials say that Highway 395 is closed from China Spring Road to the Nevada/California state line, and at the intersection of Highway 208. The fire crossed into Nevada on Tuesday. Some of the latest evacuation orders are along Leviathan Mine Road and Holbrook Junction.

Over 1,200 firefighters are assigned to the incident. Over 700 people are evacuated and at least 10 structures have been destroyed. There is no containment.