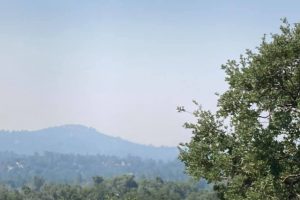 Smoke in the skies picture taken from East Sonora

Sonora, CA – As the picture in the image box shows there is plenty of smoke in the Mother Lode skies and that has caused a flood of calls into CAL Fire Tuolumne-Calaveras Unit (TCU) dispatch.

The problem is that could keep resources from handling a real emergency, according to CAL Fire TCU. They detail that the smoke is from the River Fire burning in Mariposa and Madera County and the Henry Fire in the Stanislaus National Forest near Spicer Reservoir.

To cut down on the calls CAL Fire TCU has put out this public notice, stating, “Some community members are experiencing a heavy smell of smoke. While the smoke is concerning, the Emergency Command Center is being inundated with non-emergency calls regarding the drift smoke which in turn takes valuable resources away from actual emergency calls. If you see a predominate smoke column (not a general haze) or active fire, please report it to 9-1-1.”

The smoke is expected to continue to linger for several days and is being driven by the forecasted increase of winds in the Mother Lode, according to forest fire officials, as noted in an update on the Henry Fire reported here.

To check on air quality in the Mother Lode, click on full weather at the top of the page. Scroll down the page and click on the tab above the radar image called EPA to see the hourly animated map. It can also be viewed on the homepage under current conditions.