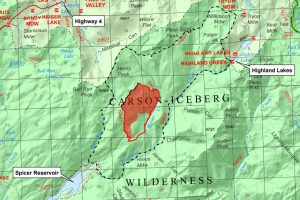 Henry Fire burning near Spicer Reservoir in the STF

The blaze, in the Carson-Iceberg Wilderness, was caused by lightning that struck at the end of last month during a storm, as earlier reported here. Forest fire officials detail, “Yesterday (Monday, July 12) the blaze was a little more active due to interior burning and burnout operations. Crews are securing the edge of the fire maintaining Minimal Impact Suppression Tactics and maximizing the use of natural barriers. A helicopter is supporting the firefighters on the ground.”

Today, Forest fire officials are concerned about increased winds noting, “High winds are predicted in the area with increased fire activity including flanking and short upslope runs where winds and slope are in alignment.”

The strategy is to continue utilizing a confine and contain strategy with ridges, creeks, trails, and other natural barriers helping to manage the fire. The terrain is steep with brush, patches of conifer trees and granite outcroppings. Currently, 60 fire personnel are working the blaze.

Campgrounds in the area are open. There are Area and trail closures including 19E41, 19E43, 20E04, and 20E01 in effect. Click here to view the closure order. Fire officials add that some smoke is showing with heat present on the southern portion of the fire. Smoke may be more visible during the day and settle during the night and early morning hours in the canyons.