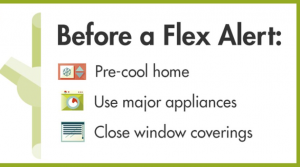 Sonora, CA–California’s Independent System Operator has issued a statewide Flex Alert for Friday from the hours of 4 pm till 9 pm. This is in anticipation of high power demand as triple-digit temperatures are a factor in a large part of the Golden State.

Officials are asking all California residents to avoid running major appliances during the previously mentioned hours, setting the thermostat at 78 degrees, and unplugging any unused appliances or charging stations. The Flex Alert covers sundown because that’s when solar energy in the state is at its least effective and the strain on the electric grid reaches its peak.

The last flex alert was issued in June as seen here.

Additionally, more information on the hot weather that will see the majority of the weekend in the triple digits can be found here.