Greenlight Given For Twain Harte Lake To Reopen 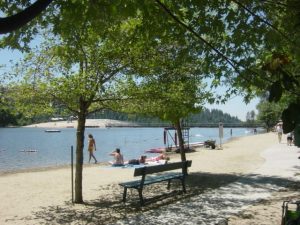 Twain Harte, CA – After last Wednesday’s sewer leak closed Twain Harte Lake, today county environmental health officials have declared it safe for swimmers to jump back in to cool down in the current triple digit temps.

Twain Harte Community Services District (THCSD) officials announced today that the private lake is safe for public contact and after a week will reopen.

“We’re very glad the Lake has tested clean and declared safe to re-open on Wednesday. Our crews are working hard to do everything possible to prevent this from occurring in the future, remarked THCSD General Manager Tom Trott.

The lake was shut down after a blockage in a sewer line spilled contaminated water into Twain Harte Creek that flows into the lake, as reported here. That stream also flows into Phoenix Lake prompting Tuolumne Utilities District’s (TUD) to let its customers know that its water supply had not been contaminated, as detailed here. The blockage contained some household products that attributed to the spill.

Trott relayed, “It is an unfortunate reminder that we live in an area where root intrusion is prevalent, and it is important to not pour grease down the drain or flush swiffers and baby wipes (even those that claim to be flushable).”

To reopen there needed to be two consecutive clean sample test results. THCSD had hoped to get testing results back in time to open the lake on Monday, but since it can take up to four days to process that deadline was not met. Trott detailed that the first result taken at the time of the “spill to assess potential contamination exceeded state levels.” Since then, all further test results have been below the required state levels and deemed to be clean and safe for swimming.

Trott instructs that a small section of the creek further upstream remains closed awaiting test results. He added, “Test results have shown this does not affect Twain Harte Lake in any way, however, out of an abundance of caution, Tuolumne County Public Health is requiring the Lake to remain closed until Wednesday.”