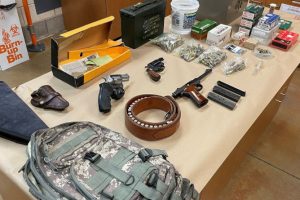 Valley Springs, CA – A Tracy man was arrested after a traffic stop in Valley Springs turned up funny money, firearms and ammunition in his vehicle.

While patrolling on Thursday near the Chevron gas station located at 7 Nove Way, off Highway 26 in Valley Springs during the midnight hour, a Calaveras County Sheriff’s Office Deputy witnessed a moving violation. After pulling over the vehicle, a record check of the driver, 34-year-old Michael Rios, revealed an outstanding warrant regarding a domestic violence case with $30,000 bail.

A search of Rios and his vehicle uncovered drug paraphernalia, several firearms, various ammunition and several counterfeit bills. As a felon, Rios is not allowed to have firearms and ammunition. He was arrested without incident for the fake money, firearms, and ammunition possession along with the previous warrant. His bail was set at $115,000.