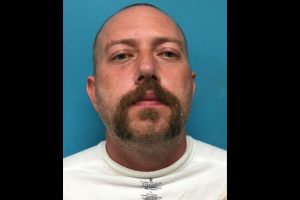 Sonora, CA – Shots rang out in the night prompting neighbors along the relatively quiet Creekside Drive in Sonora to call 911.

Tuolumne County Sheriff’s dispatch answered the calls last week that reported a dispute with possible gunshots. Upon their arrival, deputies contacted witnesses who directed them to 41-year-old Steven Rowland.

During questioning, deputies learned that two of Rowland’s dogs got into a fight inside the home. He was able to separate them and took the more “aggressive” dog out to the backyard. Sheriff’s spokesperson Deputy Nicco Sandelin detailed, “Rowland walked inside, retrieved a handgun, walked back outside, and shot the dog twice as it was laying in its doghouse, killing it.” He added that at the time the dog was no longer aggressive and had not attacked or threatened to attack anyone at the home.

Further investigation determined that Rowland was intoxicated when he fired the gun in the heavily populated neighborhood in a negligent manner, according to Sheriff’s officials. He was arrested for animal cruelty and the willful discharge of a firearm with gross negligence. His bail was set at $20,000.