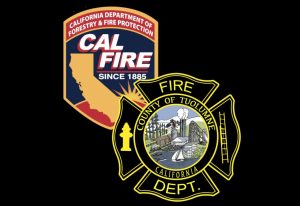 Update at 1:15 pm.: CAL Fire reports crews have extinguished several spot fires that shut down a section of Highway 49 between Rawhide and Flume roads. They did not have any sizes on the blazes, except to note that they were “all small.” That section of the roadway remains closed but is expected to reopen within the hour.

The fire broke out just before 1 p.m. Initially, the CHP put out a be-on-the-lookout for a vehicle possibly dragging a chain or someone intentionally starting the blazes. Officers were unable to find either. What caused the fires remains under investigation.

Update at 12:50 p.m.:  Fire crews are making progress on several small roadside fires along Highway 49 that has shut down a section of the roadway,

The CHP has officers turning traffic around at the intersections of Rawhide and Flume roads and it is backed up. CAL Fire reports the firefighters have been able to stop the flames from spreading on these spot fires. Currently, ground crews are checking the area for possible hot spots. No structures are threatened. Some resources have been called off the scene, including Columbia aircraft. No estimate of when the roadway may reopen has been given.

The CHP has shut down the highway at the Rawhide and Flume intersections.  Officers are turning traffic around in both directions. The fires are heading toward Angels Camp, according to CAL Fire.  There is no word on sizes or the flames’ rate of spread or whether any structures are threatened. We’ll provide more details as soon as additional information comes into the newsroom.