Tis The Season For Traffic Safety 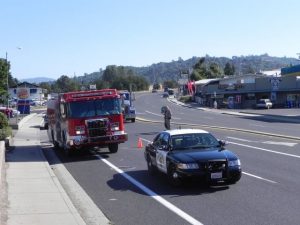 Sonora, CA — Many of you are heading to Grandma’s house or to other Christmas celebrations today which will make Mother Lode roadways busy.


The CHP wants you to get to your destination safely. CHP Spokesperson Nick Norton warns you to be alert. “Pay attention to what’s going on in front of you in regards to other cars and those approaching you. Make sure you keep a safe distance between you and the car in front of you. Look three, four or five cars in front of you.”

Norton encourages you to call 911 if you suspect another driver of being under the influence. Last year, 39 people were killed in collisions on California roads during the holidays. Among those who died, more than half were not wearing a seat belt. Officers also made more than 1,170 DUI arrests throughout the Maximum Enforcement Period in 2012. This year’s period ends at midnight tonight.