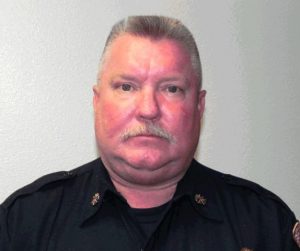 Sonora, CA — Tuolumne County took time to thank and bid farewell to a Fire Chief who was very instrumental in helping to fight the Rim Fire.

Steve Lawshe received a Certificate of Recognition from the Board of Supervisors in honor of his retirement after a 31-year career in the fire service. Lawshe’s traveled to various regions across the state and it was just in the past couple of years he transferred to Tuolumne-Calaveras Unit to finish out his career.

He served as the Unified IC representing the Tuolumne County Fire Department and CAL Fire during the Rim Fire, and was praised for developing a firefighting strategy to protect the communities of Groveland, Pine Mountain Lake and Tuolumne. CAO Craig Pedro noted that Lawshe had a passionate style for motivating firefighters, similar to George Patton and football coach Knute Rockne. The Board of Supervisors referred to the corner of the fire near Paper Cabin Ridge as “Lawshe’s corner,” because it was an area he successfully helped to protect.

CAL Fire Tuolumne-Calaveras Unit Chief Josh White was on hand at today’s meeting and also said Lawshe had been instrumental in recruiting and retaining volunteer firefighters for the department. It was noted that Lawshe had also served as Interim Unit Chief prior to White’s appointment.

–On a related matter, the county took time today to give a Certificate of Recognition to Carol Peters who is retiring after 25 years with the Department of Social Services. Peters has had several promotions, and has been serving as an Eligibility Worker Supervisor since 1996.