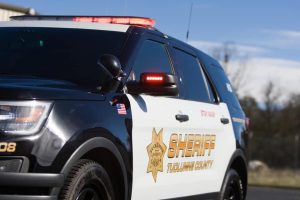 Sonora, CA–During the morning hours of Friday, June 11th, 59-year-old Gary Gilliam of Newark called 911 from a local hotel and reported a disturbance between him and “his date”. When deputies arrived, they located an underage teenage female inside the hotel room that was suffering from a medical emergency.

The victim was transported to a hospital and an investigation began. It was determined by law enforcement that Gilliam had given the victim illegal drugs in exchange for sex. Gilliam was arrested for sex crimes involving a minor, solicitation of a minor, possession of drugs for sale, and contributing to the delinquency of a minor.

Due to the age of the victim and the sensitive nature of the incident, Tuolumne County Sheriffs will not be providing any additional information. The investigation is still ongoing, but as of now, there are no reasons to think that further local victims are involved.