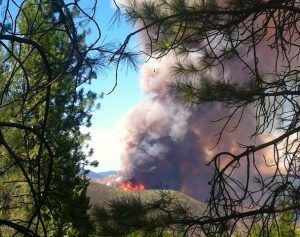 “It is unusual for the Forest Service to seek this expedited process,” says STF Forest Supervisor Susan Skalski. “Our work is urgent because the burned timber will rapidly deteriorate and lose its commercial value. The authority to move more quickly will allow us to take advantage of the fall 2014 harvest season so that we can get on with the rest of the recovery process on the Stanislaus National Forest.”

Due to the scope of the Rim Fire, an Environmental Impact Statement (EIS) which requires a period for public comment must be done, but this exemption shortens that time frame.

Forest Spokesperson Maria Benech explains, “When we release the draft EIS sometime this spring, it will cut the comment period from 45 days down to 30 days, so there’s a 15 day savings there. Also, what it allows us to do is release the Record of Decision at the same time as the final EIS. Normally, there would be a 45 day waiting period between those two as well.”

Benech says this is the first exemption of its kind in the past five years.