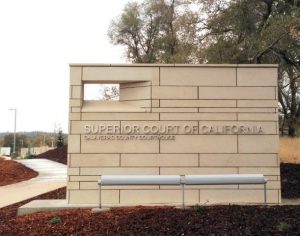 The Courthouse has four courtrooms, it is 44,600 square feet, and was built with a budget of $43.5 million. The courthouse is a LEED (Leadership in Energy and Environmental Design) silver certified building. The construction was managed by McCarthy Building Companies Inc. a national company with offices in Roseville.

The Courthouse will be open for operation on November 25th. The new address is 400 Government Center Drive, San Andreas, CA 95249

Next to the new Courthouse, work continues on the new jail and sheriff’s office. There is a tunnel connecting the jail and the courthouse but until the jail is complete, deputies will have to transport prisoners from the old jail to the new courthouse. Delays in the jail’s construction prevented all the facilities from opening at the same time. Previously Sheriff Gary Kuntz reported that electrical work still needs to be done at the the new jail. The project is several months behind schedule and is not expected to open until December or January. The related news story “No Lockdown On Jail Opening” is here.

As seen in the photos the new jail has no exterior windows, it has space for 160 beds with natural light provided by skylights. The total budget for the jail project was $56 million, paid for with a mix of state AB 900 funds and local tax dollars.