Four Puppies Lucky To Be Alive 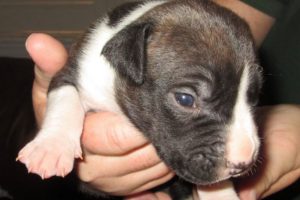 One of the four rescued puppies

Pine Grove, CA – Animal control found two emaciated dogs outside an abandoned home in Amador County and notice one had recently given birth, which set off a search to find the puppies before it was too late.

Who could leave the adorable puppies pictured in the image box and their mother behind with no food or water? Last week they were found in the 14000 block of Spurlock Lane in Pine Grove. Initially, the animal control office got word of two dogs at the property that appeared to have been abandoned. After several attempts to contact the resident with no response, they decided to seize the dogs. They were skin and bones when found and in need of immediate nourishment.

While attending to the pooches, animal control officials determined that one of the dogs was a female that was still nursing puppies. They were nowhere to be found outside the home, leaving rescuers to believe the pups were still inside the house. Sheriff’s deputies were called to the scene to assist in obtaining a search warrant for the residence. Once inside, all four puppies were located within minutes.

After medical attention, they were reunited with their mother, who howled with joy while sniffing and licking each one to make sure they were unharmed. As for their owner, that person has not yet been located and this incident remains under investigation.