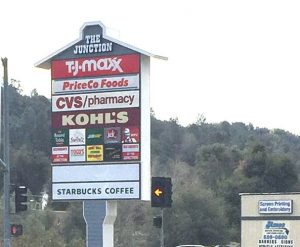 Sonora, CA — A remodel is underway at the former KFC location in the Junction Shopping Center, in anticipation of a popular burger chain opening in the fall.

Junction officials confirm that the Habit Burger Grill is planning to open at the site. The restaurant chain was founded in Santa Barbara in 1969 and now has over 300 locations, internationally. Most are in California. The closest existing locations to Sonora are Modesto, Turlock and Atwater. In March of last year, the company was purchased by Yum Brands, the parent company of KFC and Taco Bell.

A formal opening date has not been announced, but it will likely come in the fall, after a refurbishing of the existing building.