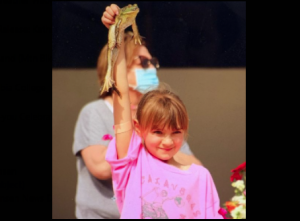 Angels Camp, CA — Bria Heintz and her frog Firefly were the big winners of the 2021 Jumping Frog Jubilee at the Calaveras County Homecoming.

Firefly jumped 20 feet and one inch to secure the win. The world record set by Rosie the Ribiter in 1986 was 21 feet and 5 ¾ inches.

Heintz, 7, is a third-generation member of the Angels Camp based Calaveras Frog Jockeys team, which is considered a local frog jumping dynasty. Five of the eight top winners in the grand finals are members. Bria’s cousin, Raychel Nash, came in second with a jump of 19 feet and one inch. Their grandfather, Jerry Heintz, is a longtime member of the Angels Camp Booster Club and has helped stage the frog jump for decades.

The Calaveras Frog Jockeys was established 30 years ago, and the team’s first winner was Joe Kitchell in 2005. The team has since taken first place nine times.