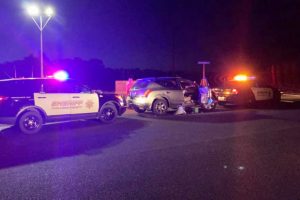 Lake Don Pedro, CA – A nearly 30-minute standoff ended with a mother arrested and a toddler rescued near the shores of Lake Don Pedro on Monday.

Tuolumne County Sheriff’s dispatch got a BOL (Be On the Lookout) in the morning from Turlock Police Department regarding an apparent parental abduction of a three-year-old child. They reported the suspect was the kid’s mother, 26-year-old Alisha Gonzalez of Modesto, who was believed to be in an SUV heading to the Fleming Meadows area of the lake, off Highway 132. While responding to that area, deputies were informed that Gonzalez had several felony warrants for child abduction and other related charges.

Once at the entrance to the campground on Bonds Flat Road, Gonzalez’s vehicle was spotted with her and the victim inside. Deputies immediately began negotiating with Gonzalez, who refused to get out of the SUV. After about 25 minutes,

her behavior became concerning as she was “acting erratic and irrational,” requiring deputies to act and forcibly remove Gonzalez from the vehicle, according to sheriff’s officials. They added that while she was being pulled from the car, Gonzalez swallowed a small amount of suspected methamphetamine in an attempt to destroy it, which she later admitted.

Gonzalez was turned over to Turlock Police, but her case will be forwarded to the Tuolumne County District Attorney’s Office say sheriff’s officials. She faces possible charges related to obstruction, child endangerment, false imprisonment, and destruction of evidence.

Luckily, the child was retrieved unharmed from the SUV and returned to a family member.