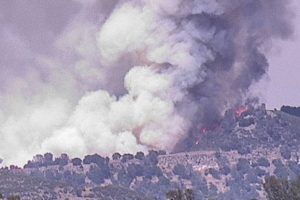 The CAL Fire chart below shows a significant increase in the number of wildfires in the state and on federal lands. The number jumped from 1,065 in 2020 to 1,788 this year, a hike of 723 fires. Even more striking is the spike in acres burned, a nearly 700% increase over last year at this time.

Escaped debris burns like the Campo Fire sparked on April 29 in Campo Seco in Calaveras County make up some of that number. It scorched 160 acres before it was contained on Tuesday, as earlier reported here. Noting that fires are primarily sparked by humans, CAL Fire TCU spokesperson Emily Kilgore disclosed, “In the TCU the number one cause of fire ignition is from escaped debris burns. That is the activity we were seeing prior to burning being suspended in the unit. Currently, over the past few days, we have seen a degree in [fire] reports.”

Even with that drop-off and although TCU is preparing for the extra activity, Kilgore’s main worry, “I’m concerned that my boots on the ground co-workers because they are fighting fires so aggressively so early, they will be fatigued come the fall when we tend to see our worst fire behavior.”

With the rise in fire activity, Kilgore shares what the public can do, “Anything and everything to create a situation of one less spark and one less wildfire. So, if you’re going to be outdoors, participating in activities that have the potential to cause a wildfire, be conscientious of what you’re doing and do those activities in a safe manner.”